Enjoy a spectacular classical music concert performed in St. Nicholas Church, one of the most beautiful Baroque buildings in Prague's Old Town. 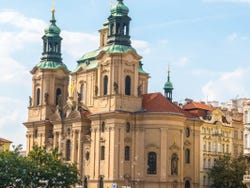 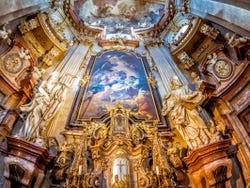 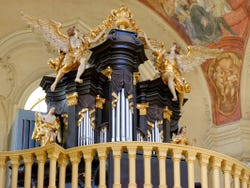 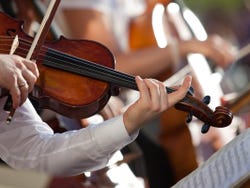 St. Nicholas Church, located just next to Prague's Old Town Square, is a perfect example of the true splendour of Czech Baroque architecture both inside and out.

Sit back in awe as this magnificent space is filled with the beautiful sounds of a classical music concert. The orchestra features a number of traditional string instruments including the violin, the viola, the cello and the double bass. The church is also home to an immense Baroque organ, played by Mozart himself in 1787, which is played during certain pieces.

Throughout the one-hour performance, you'll enjoy a number of classical works composed by European musical virtuosos, including Handel's Concerto in F Major; Toccata and Fugue in D minor by Johann Sebastian Bach; Antonio Vivaldi's Concerto in A Minor and a Violin Sonata by Wolfgang Amadeus Mozart.

You'll also have the opportunity to listen to several pieces by classical Czech musicians such as Antonín Leopold Dvořák, one of the country's most well-renowned composers. His works, written towards the second half of the 19th century, transmit the folk traditions of the country in a symphony of passion and emotion.

The concert programme may vary depending on the day and the season.

Please check local restrictions before traveling. All of our services comply with recommendations to avoid the spread of Covid-19. Show more

You'll need to present your certificate of complete vaccination and a negative PCR test. This information is for guidance only and may change depending on local regulations. Always check the restrictions before travelling.

It is compulsory to display a complete Covid vaccination certificate or a negative PCR or antigen test. This information is for guidance only and may change depending on local regulations. Always check the restrictions before travelling.

A safe distance of one metre between clients will be maintained whenever possible.

The use of masks is obligatory. The client must bring their own mask.

All those running the service (guide, driver etc...) will wear a mask throughout its duration.

Handing out of printed material such as maps or brochures will be avoided.

You can book up until 48 hours before the activity as long as there are still places. Book now to guarantee your spot.

The activity helps the dissemination of local cultural heritage.

US$ 24.80
No hidden fees or surcharges
Free cancellation up to 3 days before
Book

I travelled by myself
6

I travelled with my partner
6

I travelled with friends
Show all the reviews
like

9.30 / 10 43 reviews
Experience this surreal show with the Anthology: The Best of Black Light Theatre in the Srnec, the first black light theatre in the world.
US$ 27.10
Book
like