During the following twelfth and thirteenth centuries Prague continued to grow, and in the fourteenth century, it was transformed into an imperial capital. The Town Hall was established during the second half of the fifteenth century.

The Old Town Square is one of the most pleasant squares to visit. Welcoming and charming, the square is surrounded by winding lanes which are great to explore by foot. The Square also houses numerous buildings that are worth visiting such as the Church of Our Lady before Týn, St Nicholas Church and Old Town Hall.

Church of Our Lady before Týn

Established during the fourteenth century on the foundations of an old Roman church, the Church of Our Lady before Týn (Kostel Matky Boží před Týnem) is an impressive Gothic – style church with two sharp spires that make up Prague’s skyline.

Anchored between houses and narrow alleyways in the centre of Prague, the Church of Our Lady before Týn is the most important Gothic -style architecture in Prague and a building full of history and magic. The temple is 170 ft (52 meters) long and 91 ft (28 meters) wide. Its towers stand over 260 ft (80 meters) high.

The Old Town Hall is one of the most impressive buildings in Prague. On its southern wall is located the Prague Astronomical Clock.

The building, used until the eighteenth century as a Town Hall, stands out thanks to its Gothic tower which stands 60 meters tall and from which visitors can get a bird’s-eye view of the historic centre. 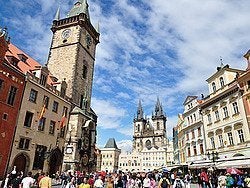 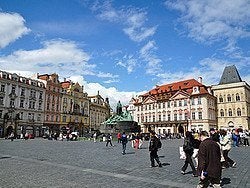 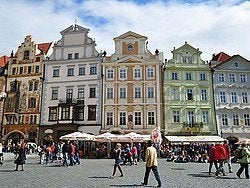 This is the beginning of the historic district (District 1) of Prague.

No rating yet
US$ 15.60
show all the activities