Prague is the capital of the Czech Republic and the most important city in the Bohemia region. It has a privileged location in Central Europe and has been a political, cultural, and economic hub since its foundation, making it today one of the top destinations in this part of the world. Traditionally, Prague was called the Golden City, City of a Hundred Spires and the Heart of Europe. Prague is made up of five historic towns and was built on the banks of the Vltava River.

The land where Prague now lays was first inhabited by the Boii, a Gallic tribe after whom the region Bohemia was named.

After the collapse of the Roman Empire, the Germanic tribes settled in the region and during the sixth century the Slavic tribes established themselves in the area. By the ninth century, the city was called Prague. During this period, merchants and craftsmen settled around Prague Castle, built by the Prince Bořivoj I of the Czech Přemyslid dynasty (the dynasty responsible for the unification of the Czech tribes in the Bohemia region during the tenth century).

In 950 the area became part of the Holy Roman Empire as an autonomous empire, and in 1061 the prosper settlement of Prague became the seat of the dukes of Bohemia. Wenceslas I (King of Bohemia from 1230 to 1253) founded the Old Town in Prague.

To avoid conflicts between the different settlers, King Ottokar II founded Malá Strana (Lesser Town) in 1257 for the German people.

Under the reign of the Holy Roman Emperor, Charles IV (1346 – 1378), Prague became an imperial city and flourished during this period. The Emperor designed the third town for the Czech people called Nové Město (New Town) and built the renowned Charles Bridge to connect the towns. In 1338, the Town Hall in the Old Town was constructed.

Between 1419 and 1434 the Hussite Wars took place in Prague. It was a conflict between Roman Catholic Monarchs and the followers of Jan Hus, a Bohemian Christian reformer who had been burnt at the stake four years earlier for his radical ideas.

In 1526, Ferdinand I was elected King of Bohemia, and from this point and up until 1918 Prague’s history would be connected to Austria and the House of Hapsburg.

Ensuing the Second Defenestration of Prague, where the Czechs defenestrated four regents sent by the Habsburg family to Prague, the Thirty Years’ War commenced, a conflict between Protestant and Catholic states. As a consequence, Ferdinand II was dethroned and Frederick V was elected King of Bohemia. During this period, the country declined rapidly and as a consequence many inhabitants left the city.

During the eighteenth and nineteenth century, Prague grew thanks to the Industrial Revolution, which drew rich merchants and European nobles to the city. These built palaces, mansions, churches and green-spaces in the city. During this time, there was a wave of nationalism between the Czech working class. In 1784, Joseph II unified the four towns.

The revolution of 1848, also known as the Springtime of the Peoples, touched Prague and the Czechs, like other nations under the Austrian Empire who revolted to achieve autonomy and independence. However, these uprisings were brutally suppressed by bombarding the city.

Prague during the twentieth century

With the collapse of the Austro-Hungarian Empire after World War I, the state of Czechoslovakia was created in 1918, choosing Prague as the capital city.

In March 1939, Prague was invaded by the Nazi troops and was made a German protectorate. At the end of World War II, Prague was under the control of the Soviet Union and thus under a Communist regime.

In 1968, Alexander Dubček became First Secretary of the Communist Party of Czechoslovakia and led a movement called “socialism with a face”, aimed at democratising the country’s institutions mildly. This originated the Prague Spring, a six-month period of reforms granting more rights to the Czechoslovakians, until the Soviet Union, who did not accept this political liberalization, invaded the country by the Warsaw Pact (a defence treaty made up by the Soviet Union, Bulgaria, Czechoslovakia, East Germany, Hungary, Poland, Romania, although the President of Romania, Ceausescu condemned the intervention).

Making the most of the Soviet crisis, on the 17th November, 1989, in Prague, students and dissidents demonstrated peacefully against the Communist Party for over a month, resulting in the end of Communist rule in the country. Since then, this demonstration has been called the Velvet Revolution or Gentle Revolution.

In 1993, Czechoslovakia was divided into two separate states. Prague was made capital of the Czech Republic. 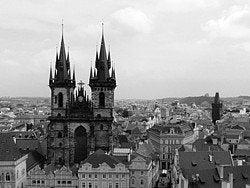 A birds-eye view of Prague 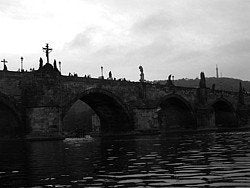 No rating yet
US$ 15.60
show all the activities