The Prague tram network is 88,5 miles (142,4 km)-long and consists of 22 daytime tram lines and 9 night lines. Combining this means of transport with the metro, passengers will be able to travel anywhere in the city.

The first tram, which was pulled by horses, started running on 23 September 1875.

Due to the horsecar trams constantly derailing and the introduction of the first electric trams in Europe during the late nineteenth century and early twentieth century, Prague inaugurated the first electric line in 1891. In 2012, over 324,2 million passengers had used the tram in Prague.

Visitors will find this tram to be the most useful when getting to Prague’s top attractions. Besides, it provides breath-taking views of the city along its route. The tram runs through Hradčany, passing by the National Theatre and stopping at Prague Castle, Loreta and Strahov Monastery.

Keep in mind that there are often pickpockets on this line since this route is very popular among tourists. It is important to keep a close eye on your belongings.

The Nostalgic tram (Tram No. 91) is a historic tram for visitors that runs on the weekends and public holidays from midday until 5 pm, once every hour, from March until November. The tram operates in a circular line and runs through the historic city centre. A one-journey ticket costs Kč 35 (US$ 1.60) for adults and 20 CZK for children (aged less than 15).

Find out more about the fares and transport tickets and passes here. 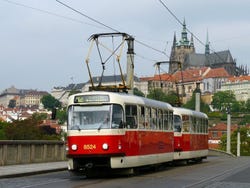 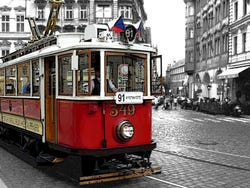