In a privileged location, at the end of the Charles Bridge in Malá Strana, Kampa Island is considered one of the most beautiful city islands in the world.

Kampa Island is an artificial island on the Vltava River, separated from Lesser Town by the “Devil’s stream” (Čertovka). Legend has it that the name of the artificial channel comes from a bad-tempered laundry woman who lived in the Seven Devils House.

For centuries this island was famous for its green spaces and its mills on the Čertovka stream, and where women went to wash their clothes. There are still several mills that can be seen on the island, but the Grand Prior’s Mill has been fully restored with an impressive 8-meter wheel.

Visitors will not only be able to discover the island’s public park, its winding streets and its buildings, but can also enjoy a meal in one of Prague’s most romantic restaurants.

If you leave Kampa Island by the Grand Prior’s Mill, you will get to Grand Priory Square, where the Lennon Wall is found. This wall became a political symbol of peace among the youth in Prague during the Communist regime. An image of the singer was painted on this location and whitewashed by the secret police on many occasions. However, the citizens never stopped writing peaceful messages and painting more images of Lennon. 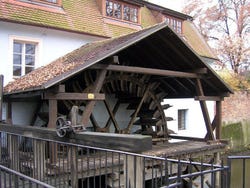 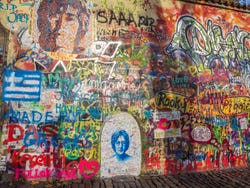 Malá Strana, down the stairs from Charles Bridge .