The Prague Astronomical Clock is the world’s most famous Medieval clock. It was built in 1410 by the clock makers Mikuláš of Kadaň and Jan Šindel. However, until 1961, when a document was found revealing the real identities of the authors of the Astronomical Clock, it was believed that this masterpiece had been made by the clock master Hanuš. The legend also recounts that the author believed to be responsible for this masterpiece, Hanuš, was blinded by Prague Councillors when they discovered that he was making an even better clock for another city. The clock was repaired by Jan Taborský during the sixteenth century.

The Astronomical Clock is located on the southern wall of the Old Town City Hall. It is made up of three principal parts.

The newest part of the clock, dating from 1865, is a Calendar Dial painted by Josef Mánes. It represents the months of the year. The Dial also has medallions with all the zodiac signs and the Prague Old Town symbol in the centre.

The Calendar Dial has four small sculptures that don’t move: a Philosopher, an Angel, an Astronomer and a Chronicler.

The top part of the clock is what is called the Astronomical Dial. It represents the Universe or at least the maker’s perception of it when it was built during the Middle Ages. The dial includes a Zodiacal ring that shows the location of the Sun and the two clock hands are designed with a Sun and a Moon each.

The three dials that can be seen all show different times. The largest dial shows the Ancient Czech Time, the second-largest shows the Central European Time and the smallest circle shows Unequal Time (Babylonian Hours).

Sculptures of the 12 Apostles

The most striking aspects of the clock are the moving 12 Apostles sculptures carved out of wood. They are located in the upper windows of the Astronomical Clock and appear every time the clock strikes the hour.

Around the 12 disciples, there are four figures representing some of the capital vices, such as vanity, portrayed by a man looking at himself in the mirror, greed, illustrated by a man holding a moneybag, and a figure representing lust. There is also a sculpture of death, a skeleton that strikes the hour at the beginning of the parade.

If you want to get a breath-taking view of the Old Town Square, we recommend climbing the Town Hall Tower. 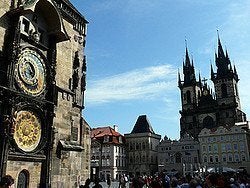 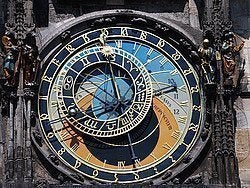 Four figures of the Astronomical Clock 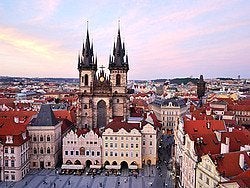