The funicular was originally inaugurated in 1891, and in 1932 an electric motor was installed replacing the water balance propulsion, which had been used since it was opened.

From 1965 until 1985, the funicular was suspended due to frequent landslides in Petřín.

The funicular opens every day from 9 am - 11:30 pm at intervals of 10 – 15 minutes from April until October. From November until March, it opens from 9 am - 11:20 pm. On weekends many locals go up to the top of Petřín and there is usually a line for the funicular.

To use this cliff railway visitors will need a one-way ticket or a 1-Day or 3-Day travel card. Combined tickets are not valid for this mode of transport. 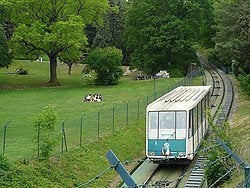 You can get the funicular from Újezd.

Single funicular ticket: between 24 and 32 CZK