The State Opera (in Czech: Státní opera) was founded in 1888, where the New Town Theatre was situated. It opened as the New German Theatre and then was known as the Smetana Theatre. It is currently called State Opera or Prague State Opera.

The building was reconstructed during the eighties. Nevertheless, it still maintains certain elements from the late nineteenth century since it was first built such as the red velvet, the chandeliers and the gilded stucco

To be able to see the State Opera from inside, visitors will have to purchase a ticket to one of its Operas or ballets.

Opera or ballet performances are scheduled nearly every day and, depending on what you intend to see and the seats you wish to have, you can get tickets from just Kč 100 (US$ 4.60) each. 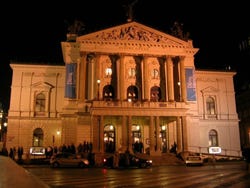 Metro: Muzeum, lines A and C.