Although the Czech Republic has several international airports, the largest and best-connected airport is located approximately 9 miles (15 km) away from Prague’s city centre: Prague Ruzyne Airport (Václav Havel Airport Prague).  This airport has three terminals, and in 2014 over 11 million passengers used one of them.

Even if you’re thinking of travelling to another city in the Czech Republic, the easiest option is to fly to Prague’s airport and from there take alternative transport to your destination.

There are numerous low-cost airlines that fly directly to Prague from most cities in Europe. Here are a few options:

Flying from the US

Consequently, a stop-over either in JFK or any European city like London is most likely necessary.

Air Transat flies to Prague from Toronto, with a touchdown in Montreal.

If you have your flights booked, find out how to get to the city centre on our article on Prague Ruzyne Airport.

If you’re organizing a holiday in several cities of Central Europe and are planning on flying first to Vienna, Budapest or Bratislava, we suggest getting a train from any of these destinations to Prague.

Trains from Vienna take four hours and the fares are quite cheap. There are currently no high speed trains connecting the two cities. To book your tickets check out the OBB Austrian Railway website. We recommend getting your tickets in advance. 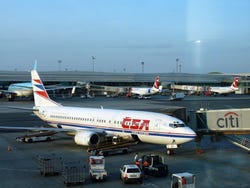