If we compare the average wage in the Czech Republic with a local taxi rate in Prague, we come to realize that taxis are considered a luxury for most citizens in this city. Although the drop charge isn’t very high, the rate per kilometre is higher than in most European capitals, for example, Madrid and Rome.

Taxi drivers in Prague have a very bad reputation and are known for frequently swindling their passengers. It is said that a taxi driver once even charged the Mayor of Prague extra.

From 2007 the taxi rates have been regulated by law:

Anyone who has taken a taxi in Prague will have noticed that the drivers are not particularly honest, even though in the past few years the system is changing for the better. Here are a few suggestions if you’re thinking of taking a taxi and don’t want to pay extra:

Strangely, with certain taxi companies, the rates are cheaper if you call their central dispatcher instead of getting a taxi at a stop or on the street.

These are the numbers of the most important taxi companies: 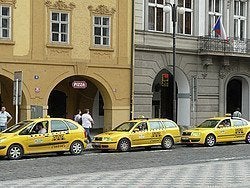