Fall in love with the charm of Prague's ancient streets and monuments on this evening walking tour of the Czech capital, illuminated by the city's ornate street lamps and the light of the moon. 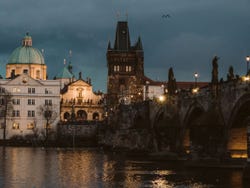 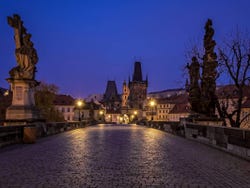 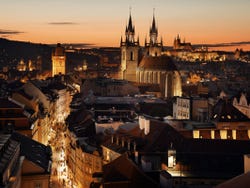 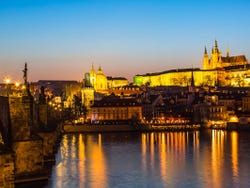 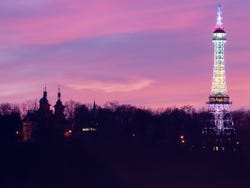 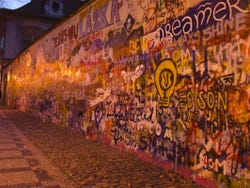 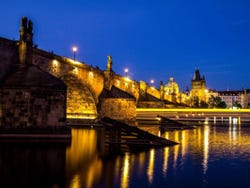 Meet your professional English-speaking guide next to the iconic Old Town Bridge Tower on Charles Bridge, ready to start your walking tour.

Stroll across the early 15th century bridge, which connects the two sides of the city divided by the river Vltava. Despite being one of Prague's most visited landmarks, once the sun sets, Charles Bridge takes on a unique peaceful atmosphere allowing you to truly appreciate the beauty of its architecture. From this viewpoint, you'll also enjoy spectacular panoramic views of Prague Castle, the largest ancient castle in the world.

Crossing to the other side of the bridge, you'll reach one of Prague's most iconic landmarks, and a favourite of Beatles fans, the Lennon Wall. Admire the ever-changing graffiti, which is added to every day with a different lyric or image representing symbols of love and peace.

From here, you'll take the city's historic funicular railway up Petřín Hill, at the top of which you'll find the Petřín Lookout Tower, an observation deck of more than 200 feet (over 60 m) in height. As well as enjoying the magnificent views, being at the highest point in Prague, you'll also see an ancient monastery famous for its craft beer.

Begin your walk back to Prague's Old Town via the Malá Strana district. The neighbourhood dates back to the Middle Ages, but after devastating fires in the 1500s, the majority of buildings were rebuilt in Renaissance styles. Admire the beautiful houses along Nerudova street and Malostranské náměstí, where you'll see the spectacular Baroque St Nicholas' Church.

Your guided evening walking tour of the Czech capital will finish in the city centre, where you'll be left to continue enjoying Prague's nightlife at your own pace.

During the summer months, the tour will be mainly in daylight.

Prague's funicular will be closed from 4th March to 15th March and from 5th October to 23rd October. Instead, we'll take a tram to the top of Petřín Hill.

All of our providers comply with local legislation and applicable health recommendations to avoid the spread of Covid-19. Show more

The capacity of all means of transport will be reduced to 75% of their maximum capacity.

At monuments, museums and attractions, the maximum permitted capacity will be a 75% of the total maximum capacity.

You can book up until 24 hours before the activity as long as there are still places. Book now to guarantee your spot.

US$ 17.40
No hidden fees or surcharges
Free cancellation up to 24 hours before the service starts
Book

It was incredible !! Our guide was the best ! We enjoy a lot !! I totally recommend it

It was fantastic. It was just me and my companion so we basically had a private tour. Our guide was great, he gave us a ton of information and was really nice. We will return to Prague without a doubt! Opinion translated. Show original.

I travelled with friends
8

As there is no funicular, the distance from the tram is a good walk upwards with a fairly light step, at certain ages it is already expensive, they should notify you Opinion translated. Show original.