Get to know the jewel of West Bohemia, Karlovy Vary, the spa town known globally for the thermal baths scattered around the city.

As well as its spas, Karlovy Vary is also famous for its International Film Festival, Moser glassware, and the Becherovka herbal liquor. 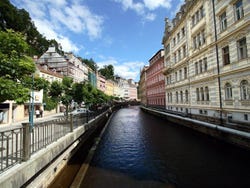 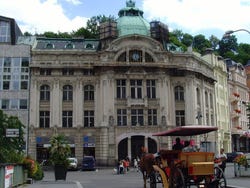 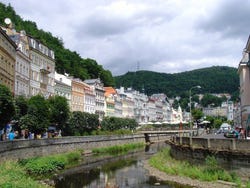 The tour meets at the Powder Tower leaves the centre of Prague at 8:30 am heading northwest towards Karlovy Vary, making our first stop at a viewpoint, taking in views of the spa town, and orientating ourselves before diving in, metaphorically and perhaps physically, to try its curative waters.

The tour will take in the impressive geysers which spring from underground, forming a 14-metre tall fountain of water, the striking colonnades for which the town is famous, sampling the spa waters which emanate from their numerous fountains, the headquarters of the Knights of the Maltese Cross, and Mozart's house.

All the while your expert local guide will fill you in on the history of the places you visit, the love Holy Roman Emperor Charles IV had for the town and the sites he founded, the first resort built in the 18th century, its expansion over the coming years and its modern role. Today the town is known for its world-famous Moser glassware, and the tour includes a visit to the Moser factory and perhaps you can sample Becherovka herbal liquor as you take advantage of free time at the end of the tour to explore on your own.

The tour then returns to Prague, leaving you at the same point where it began at around 6 pm.

It is compulsory to display a Covid vaccination certificate or a negative PCR or antigen test performed up to 48 hours before the activity. Vaccines and tests must be authorised and recognised in the country of the activity. Show more

A safe distance of one metre between clients will be maintained whenever possible.

The use of masks is obligatory. The client must bring their own mask.

All those running the service (guide, driver etc...) will wear a mask throughout its duration.

Disinfected radio units will be provided, and headphones will be single-use.

Handing out of printed material such as maps or brochures will be avoided.

The temperature and wellness of all those taking part in the service will be monitored daily, excluding and maintaining in quarantine any who display fever or symptoms.

The capacity of all means of transport will be reduced to 50% of their maximum capacity.

At monuments, museums and attractions, the maximum permitted capacity will be a 50% of the total maximum capacity.

The temperature of all attendees will be taken, and admission will be denied to those with a temperature of more than 37 degrees Celsius (99 Fahrenheit).

Entry to the Moser factory.

You can book up until 48 hours before the activity as long as there are still places. Book now to guarantee your spot.

US$ 78.70
No hidden fees or surcharges
Free cancellation up to 3 days before
Book