Enjoy the best works of classical music in this concert, hosted in an impressive Baroque hall in the Lobkowicz Palace. You'll spend an unforgettable afternoon admiring the incredible setting for the Czech Philharmonic Orchestra. 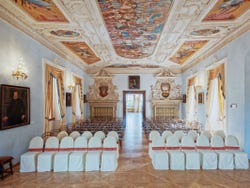 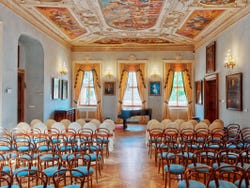 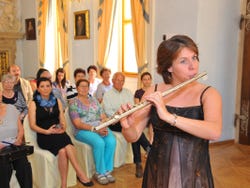 The programme varies from one day to the next, but during the concert you are sure to be delighted by the majestic playing of the Czech Philharmonic Orchestra, interpreting the works of Bach, Vivaldi, Mozart or Beethoven, as well as pieces from some of the great Czech composers of the 19th Century, such as Dvořák and Smetana.

The concert lasts an hour and takes place in a beautiful Baroque concert hall from the 17th century, with a stunning stucco ceiling creating a romantic air, the perfect setting for this classical music to come to life.

The Lobkowicz Palace is one of the most important cultural spaces in the Czech Republic and holds numerous impressive works of art and objects which belong to the Lobkowickz family.

The palace was built in a renaissance style and later reconstructed in a more austere Baroque style. The Baroque concert hall from the 17th century has capacity for 100 spectators.

There are two kinds of tickets: category A corresponds to the first and second row in the concert hall and category B corresponds to the seats found from the third row onwards. We recommend that you reserve as early as possible, especially if you want the best seats!

All of our providers comply with local legislation and applicable health recommendations to avoid the spread of Covid-19.

You can book up until 14 days before the activity as long as there are still places. Book now to guarantee your spot.

Wheelchair accessible. This must be indicated in the reservation.

US$ 17.70
No hidden fees or surcharges
Free cancellation up to 5 days before
Book

Free! Free cancellation up to 5 days before the day of the activity. If you cancel under this time or do not show up, you will not be refunded.

Inside the Prague Castle complex (Jiřská 3).

I travelled with small children
10

I travelled with friends
Show all the reviews
like