Discover Europe's largest and oldest private art collection in the unique atmosphere of the Lobkowicz Palace, the only private area of the Prague Castle. Pass through majestic halls of the impressive palace, discovering their works of art. 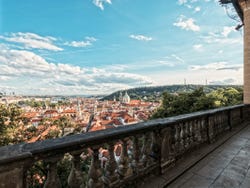 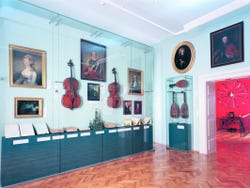 What to see in the palace?

The exposition, composed of 22 galleries, illustrates the dramatic history of the family though the personal effects and works of art on display in their collection. Pieces of porcelain, musical instruments, manuscripts form Beethoven or Mozart, military objects, decorative pieces from the 16th to the 20th centuries or some of the masterworks of the greatest artists such as Canaletto, Velázquez or Bruegel the Elder

Taking the tour with an audioguide in English you can enjoy each and every detail at your own pace, being able to stop in the parts of the palace which interest you most. The audioguide is narrated through the eyes of two generations of the family.

Found in the Prague Castle complex, the  Lobkowicz Palace was constructed in the 16th Century, in a renaissance style. Having suffered a fire in 1541, it was reconstructed in a more austere Early Baroque style which can be seen today.

During the Second World War, the family's fortunes began to change, and the palace was seized for the first time. At the end of the war they recovered it, but during the communist regime, all their possessions, including the palace, was once again confiscated.

In 2002 the  Lobkowicz palace was once again returned to the family, and following significant reconstruction in 2007, it opened its doors to the public to exhibit its history and collections to visitors.

Please check local restrictions before traveling. All of our services comply with recommendations to avoid the spread of Covid-19.

The activity takes place with an audioguide in in English.

Entry to the Lobkowicz Palace.

You can book up until 14 days before the activity as long as there are still places. Book now to guarantee your spot.

Wheelchair accessible. This must be indicated in the reservation.

US$ 13.60
No hidden fees or surcharges
Free cancellation up to 5 days before
Book

Free! Free cancellation up to 5 days before the day of the activity. If you cancel under this time or do not show up, you will not be refunded.

Inside the Prague Castle complex (Jiřská 3).

I travelled with my partner
8

I travelled with my partner
8

9.30 / 10 43 reviews
Experience this surreal show with the Anthology: The Best of Black Light Theatre in the Srnec, the first black light theatre in the world.
US$ 27.10
Book
like